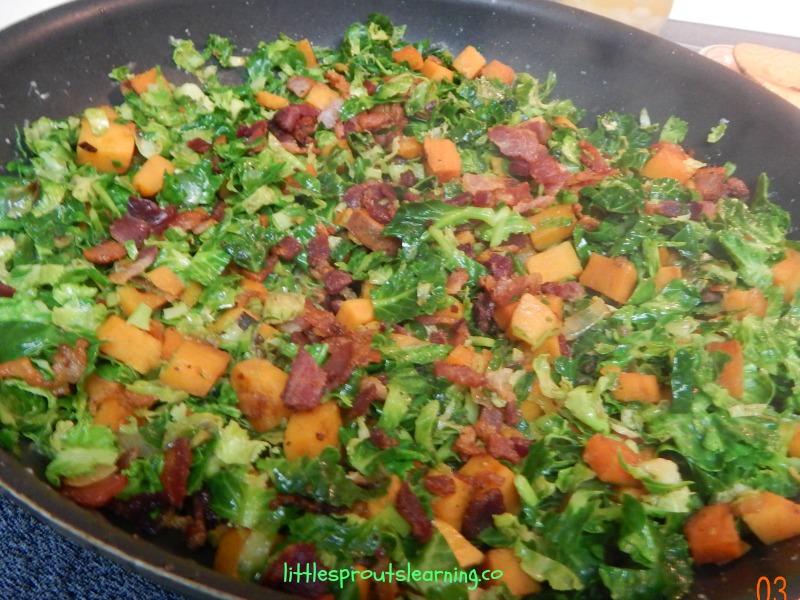 We had some brussels sprouts ready in the garden, so as soon as it warmed up enough to take the kids outside to get them, I was going to make something amazing for them.

Tuesday was the only day it got above 40 and we were scheduled to give a tour of our garden to a couple of special visitors, so while we were out there, we hacked off a few stalks and brought them inside to harvest.

We still have a few sweet potatoes left from our harvest in the fall, we were good to go on this tasty combination of brussels sprout and sweet potato with bacon.

It’s been a while since the kids and I had anything to harvest, so they were pretty excited and took turns pushing the wheelbarrow and carrying the stalks.  It was still pretty chilly and windy outside, so we pulled the sprouts off the stalks at the kitchen table.

(Never mind what Mr. Kent had to say when he came home and saw the mess, we don’t need to talk about that, but usually we do pull them off outside when it’s not so cold)

I just sliced the sprouts and diced up the sweet potatoes into small cubes.  We had a lot of Brussels sprouts so I doubled the recipe below.  I had a couple of kids begging for even thirds of this tasty treat.

All of the kids tried it and most of them liked it.  I do have a child or two that only like a few select foods, but they still tried it and that’s a success in my book.

When you are trying to encourage kids to try healthy foods, be patient, it usually takes a few tries before they will eat it well.  Just don’t pressure them and they will usually work it out on their own.  And remember, not everyone is going to like much of anything unless it’s candy or something.

A little side story from the daycare. I kept two brothers at different times because one is much older than the other. They were two of the pickiest kids I’ve ever kept. They mostly only ate crackers. The older one that I had first was much worse than the younger one, number two liked a few kinds of fruit.

During the time I kept them, they learned to like a few new things, but not a whole lot. The older brother is a teenager now and his science fair project this year was what would it do to your body if you quit drinking soda and eating chips and only ate fruits and vegetables, meats and bread.

I find this remarkable that after all these years, his interest in healthy food that I tried to start was still brewing. He actually used his own body as the subject matter and gave up his favorite junk foods. Then he recorded the changes and learned that he could perform better in football if he kept this diet. So cool! The knowledge eventually makes a difference.

First, I chopped up a few pieces of bacon and cooked it until done.

Then I took it out of the pan and drained it on a paper towel.  In the bacon fat, I sauteed the onion until it was translucent.  And then added the sweet potatoes.  I added a half a cup or so of water and placed a lid on the skillet so the potatoes could steam and get tender all the way through.

Here are the Brussels sprouts freshly harvested by the kids.  After I rinsed them well, I sliced them and tossed them into the skillet with the sweet potatoes.

I cooked them for a minute or two and then added the bacon back on top and sprinkled on some salt and pepper.  This was by far THE BEST Brussels sprout recipe I have ever tried.  Delish! 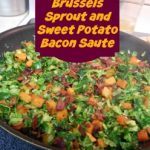 For more bacon recipes, check these out: 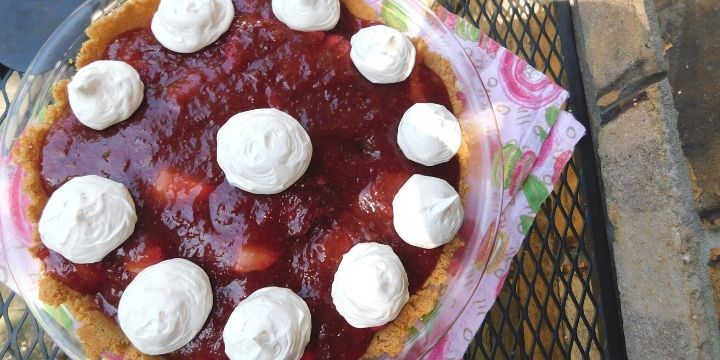 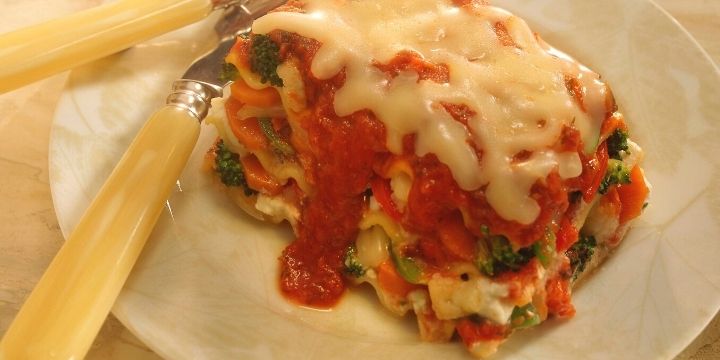 Do you want to go meatless sometimes but don’t know what to cook without meat? Check out these Meatless Monday Ideas for some inspiration for wonderful meatless meals. 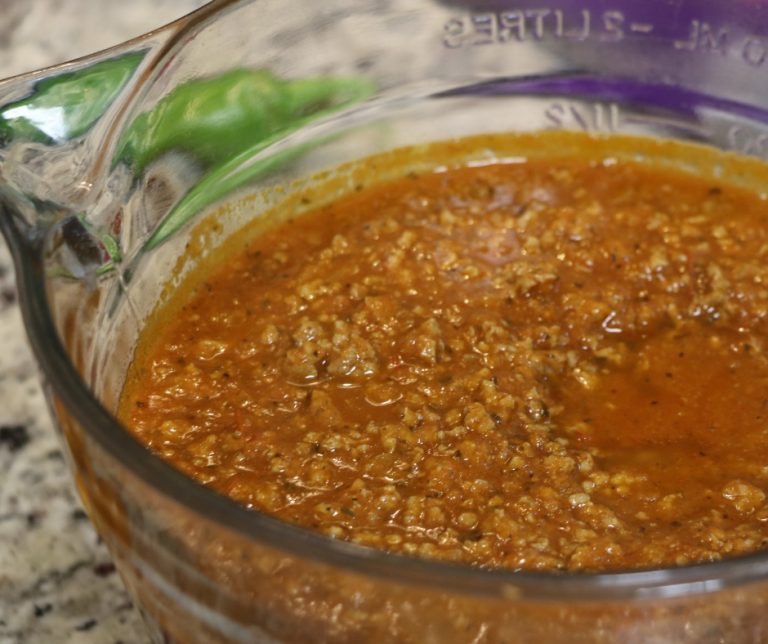 There’s nothing better than homemade spaghetti sauce. It beats the sauce in a jar by a mile. So much flavor can be infused in the tomatoes and your spaghetti or whatever else you want to make with this sauce will be out of this world. 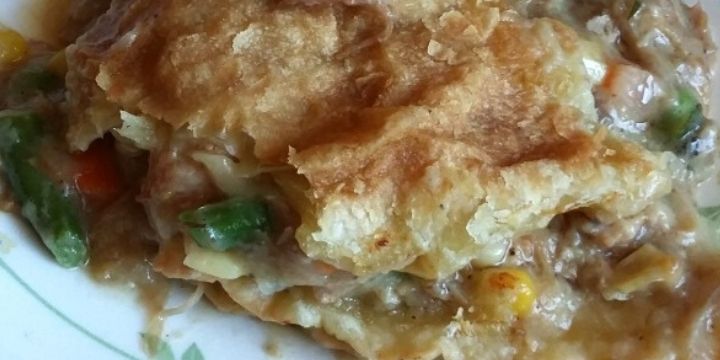 I love to make a big pork roast because I can use it leftover in a bunch of ways. One of my favorites is this leftover pork roast pot pie 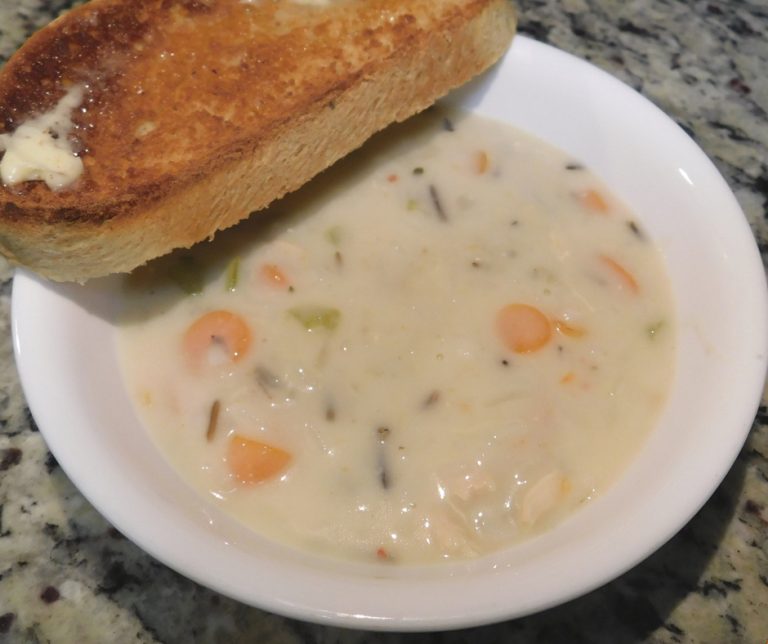 There’s nothing more comforting than a nice warm bowl of soup, but who has time to whip one up? With your instant pot, you can have this chicken and wild rice soup in a few minutes with little work. And for more soup recipe ideas, check these out.  A few months ago, when my friend… 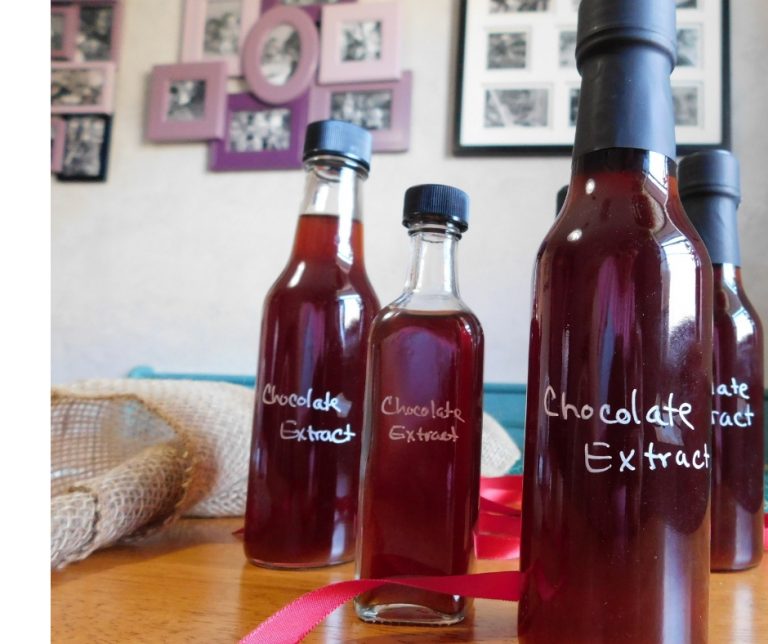