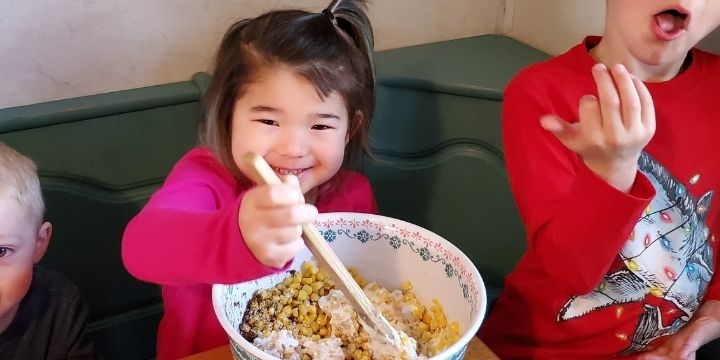 Elote in a cup is a mess-free treat when you are craving Mexican street corn. Everything is layered in a cup that is easy to carry. It just takes a little planning to learn how to teach kids cooking classes.

I first discovered the flavors of elote years ago when my mom attended church in a Hispanic community in Oklahoma City. It was called Little Flower and every year they had a big festival with wonderful treats of all kinds.

I had never had Mexican street corn, but they offered it there in a cup, along with fruit juices, desserts and pastries, and so many other wonderful delights. The elote was the most memorable for me.

This is also where we learned to make confetti eggs that you smash over the top of other people’s heads. We made them for our easter party for years. They are such fun!

Traditional elote is on the cob and some people say the silks are tied and used as a handle while others claim it’s on a skewer. I don’t care how you do it, just make some and eat it.

I love it on the cob, but for kids, I had the idea to make it in a bowl and serve it in cups like at Little Flower because of the mess. There are 7 of them and one of me.

Another thing that makes it authentic is finding the correct ingredients such as Mexican Crema and Cojita cheese. If you can’t find those ingredients where you are, some substitutes could be sour cream for the crema and parmesan for the cojita. It won’t be authentic, but you can only get what you can get.

When I decided to make it with the kids, I had a daycare parent that knew the real deal, so he helped me and also helped me to know where to shop for authentic ingredients. It’s fun to find easy recipes to cook with kids.

Traditionally you grill the corn also. We did a bag of frozen corn since we weren’t using corn on the cob. But the flavor of grilled. Oh my, you HAVE to give it a try!

They serve it at a little snow cone booth in town and I love to get some any time I can! YUMMO!

Elote is a dish comprised of cooked sweet corn slathered in a mixture of spicy mayonnaise, crema, and chili powder and then sprinkled with cheese and herbs. It is a popular snack sold by vendors both on the streets and at festivals in Mexico. It’s the perfect side dish for summer! Elote in a cup makes it easy to transport too.

Mexican street corn in a cup

When elote is off the cob, it’s actually called esquites or elote en vaso, but we learned at the festival to call it elote, so I usually call it that either way. Appetizers or late night snacks like these are called antojitos or little cravings. So fun!

First, cook the corn. Like I mentioned, you can grill the cobs in the husks, cut them off and roast or boil them, use the instant pot, or whatever you like. You can also use frozen corn like we did. To boil, bring a large pot of salted water to a boil and drop in the ears for just a few minutes.

If grilling, peel the husks back, remove the silks, slather the corn with some butter, and replace the husks. Grill for just a minute or two on each side.

Mix the mayo, crema, and lime juice together and spread a thin later over the cobs or mix in the corn kernals. Then sprinkle generously with cojita, chili powder and cilantro.

Crema tastes similar to sour cream, but a little tangier and thinner, so if you want to substitute, you could add more lime juice to the sour cream to get closer to the flavor.

Mexican corn in a cup with parmesan

If you can’t find cojita cheese (it’s hard to find here) you can substitute parmesan for the closest flavor that I can think of. Cojita is special though, so get it if you can find it.

How to make elote with canned corn

You can also make elote with canned corn if that’s what you have. It won’t have as much wonderful corn flavor and texture as other corn. But it will still be good. I mean, corn is just good! 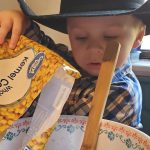 Elote in a Cup

The kids and I loved making this together and they loved eating it as much as I did.

Cooking with kids has some wonderful fundamental benefits and making a homemade pretzel recipe has the added benefit of being super fun! Any kind of dough the kids can work with is a wonderful way to build fine motor skills, coordination, and other skills kids need for success. And they’re delicious! 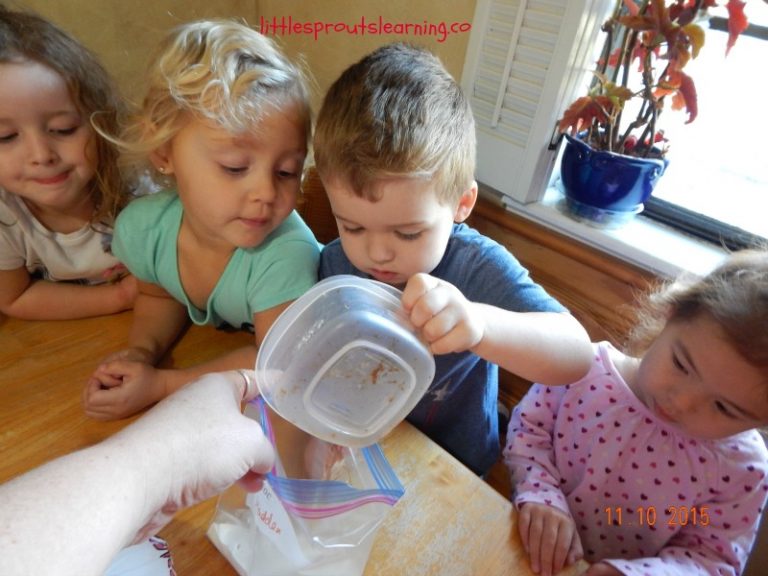 Ice cream is a super fun treat for kids and adults and it couldn’t be easier to whip up this ice cream in a bag recipe by hand. This is a great recipe to make with kids! Kids can do the mixing all on their own and have a tasty treat to enjoy in just a few minutes.

Cooking with kids is important. Cooking is a life skill children need and even though it’s tempting to shoo them out of the kitchen so you can get things done, every once in a while it’s a great idea to get them involved. There are many reasons to cook with your kids. 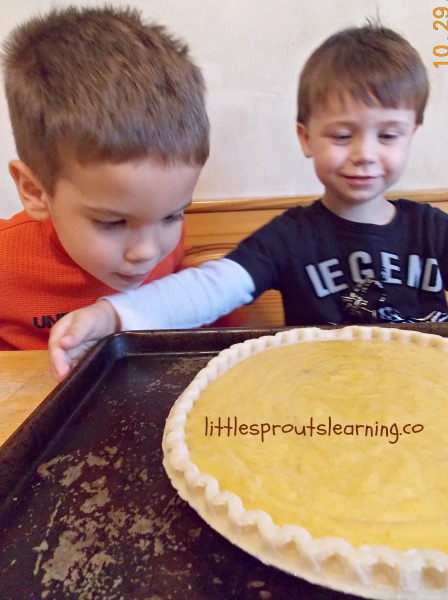 This kid-friendly pumpkin pie recipe is fun for kids to help you make. I hope you’ll get in the kitchen with your kids for some kids cooking classes. 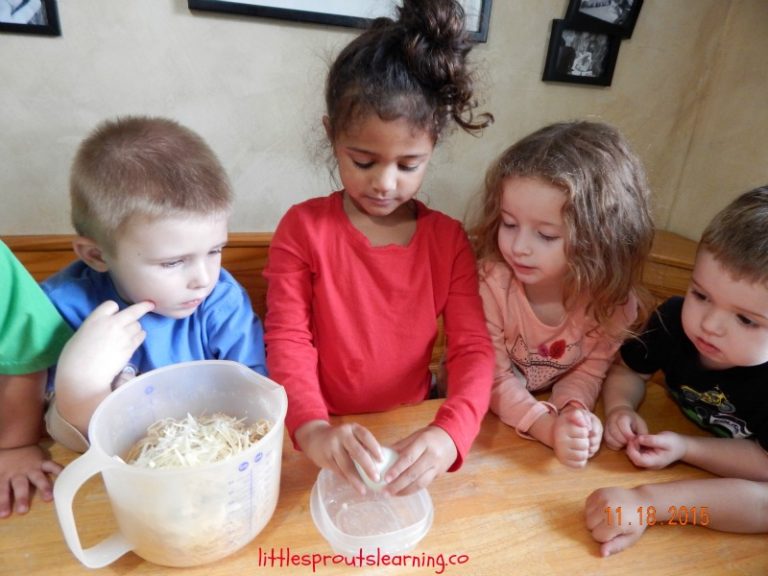 Do you think teaching kids to cook is too much of a hassle? Having recipes kids can make could change the future for them. 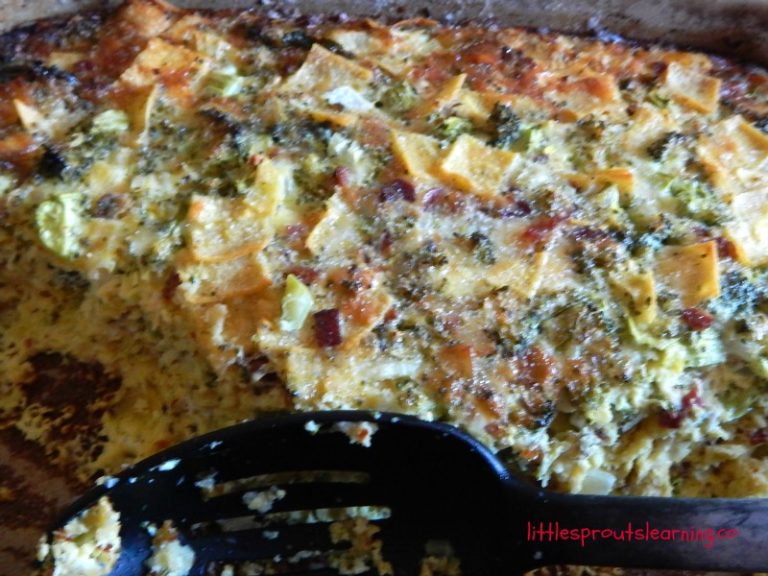 Kids are 80% more likely to try foods if they help prepare them so kids cooking classes are great. Try teaching them to cook egg and vegetable casserole.